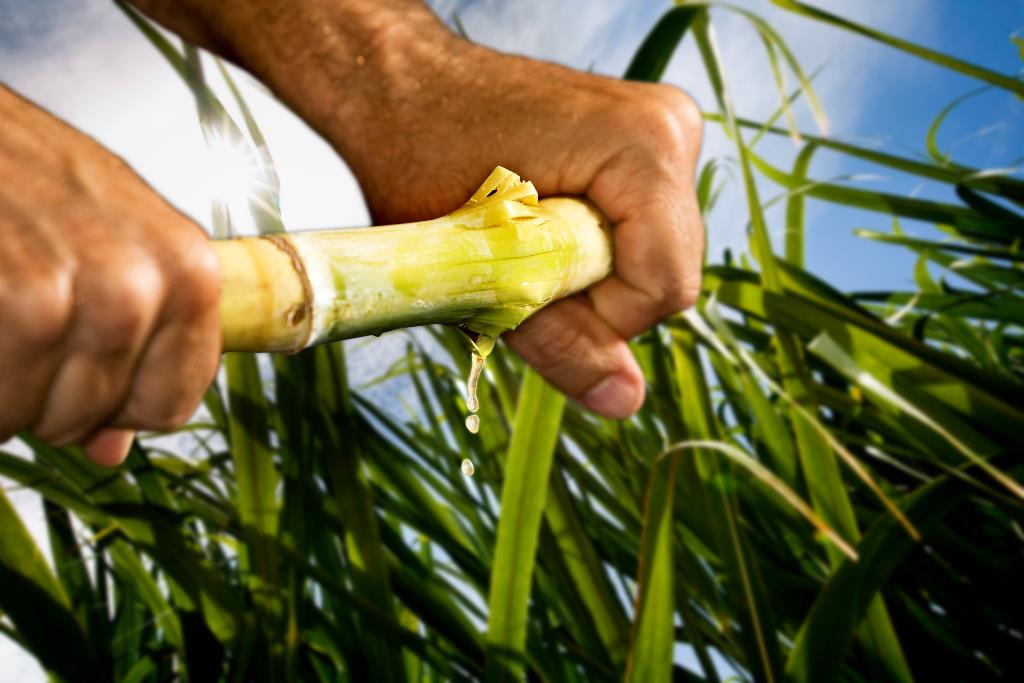 Sugar in Australia is sourced from sugar cane. Most Australian sugar cane is grown on family-owned and operated farms. Farmers prepare their land by cultivating the soil. Once ready, sugar setts (cuttings from mature cane stalks) are planted. These setts are cultivated for 10 to 18 months. When mature, the sugar cane is harvested using mechanical harvesters. 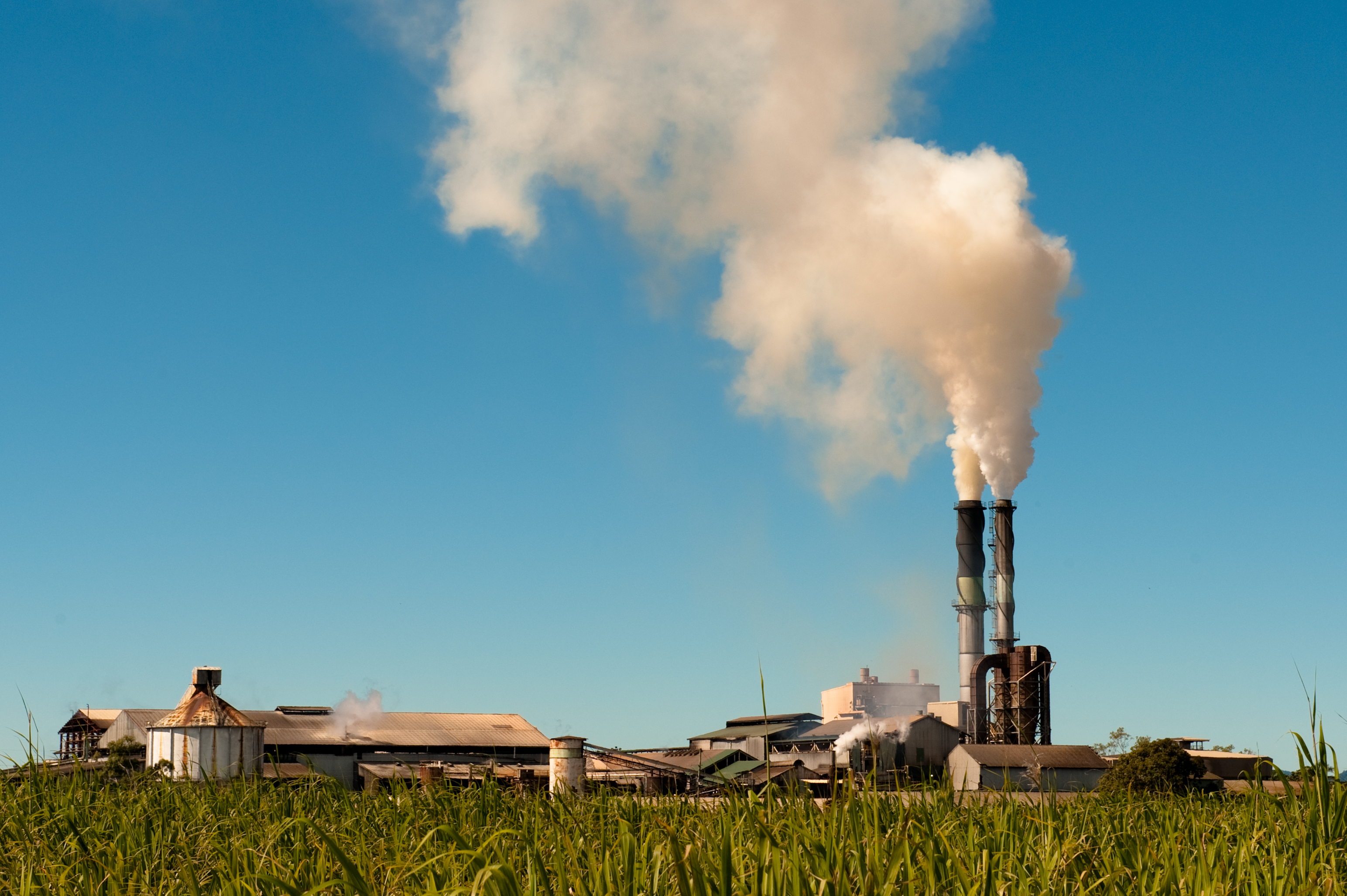 Harvested sugar cane is transported to a raw sugar mill. Because sugar cane must be milled as soon as possible, mill owners have made substantial investments in cane railway networks and rolling stock. At the mill, sugar cane is weighed and processed before being transported to a shredder. The shredder breaks apart the cane and ruptures the juice cells. Rollers are used to separate sugar juice from the fibrous material, called bagasse.

The bagasse is recycled as a fuel for the mill boiler furnaces. Juice from the sugar cane is then subjected to a purification process before being concentrated by boiling in an evaporator. The concentrated juice or syrup is concentrated even further and is seeded with small sugar crystals in a process called crystallisation. The sugar crystals are grown to the required size by adding more syrup while the boiling continues.

Syrup is separated from the raw sugar crystals in centrifugals. Molasses is the syrup left over from the final centrifuging. The raw sugar from the centrifugals is then dried and transferred for short-term storage in bulk bins at the mills. 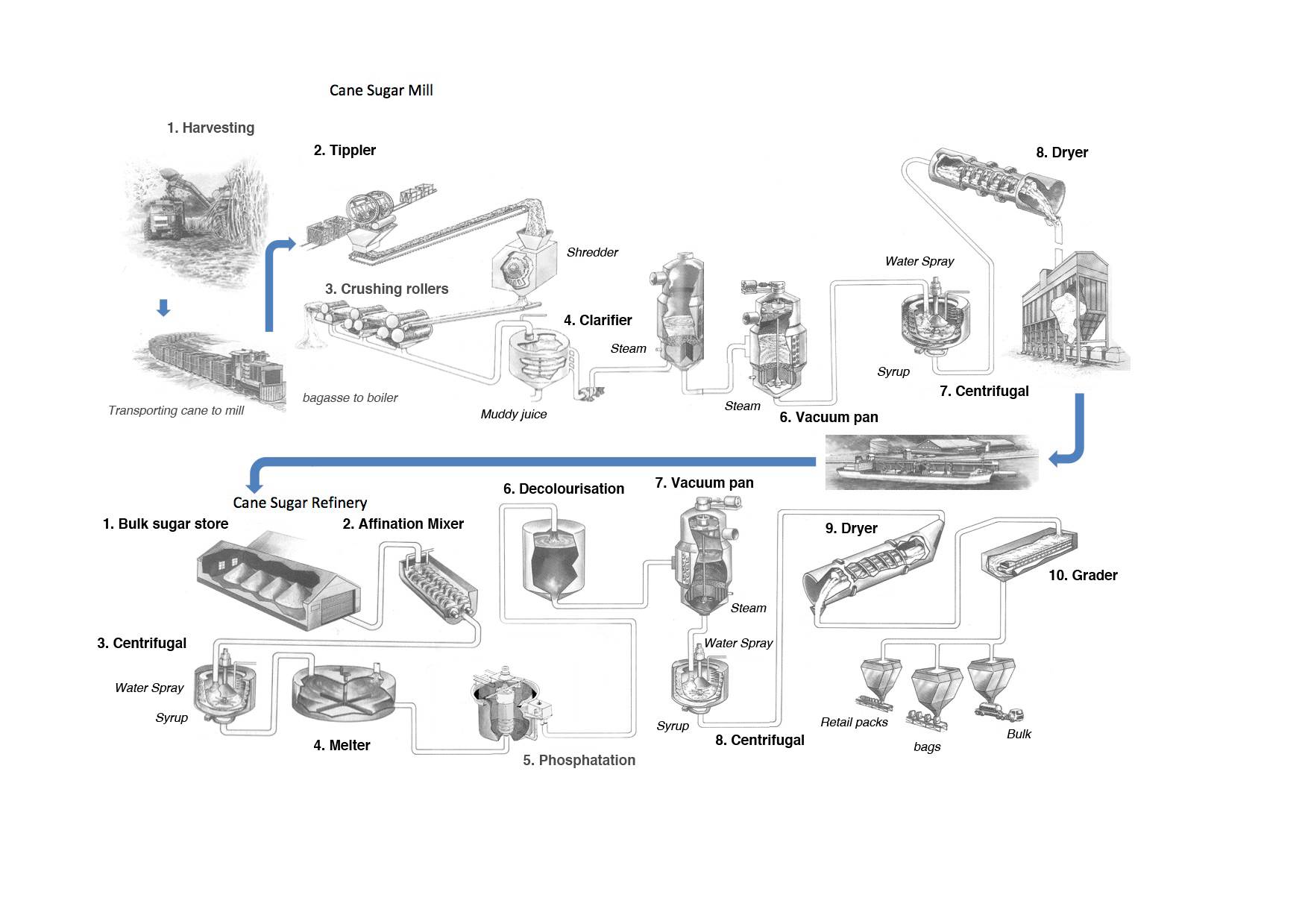 The refining process begins with a process called affination which involves mixing the raw sugar with hot concentrated syrup to soften the outer coating on the crystals. The crystals are then separated from the syrup by spinning in a centrifugal.

The crystals are discharged from the centrifugal and dissolved in hot water to form a sugar liquor. The melted sugar liquor is then purified, utilising either the carbonation or phosphatation process. These processes trap suspended impurities in larger particles which are easier to separate from the sugar liquor.

Carbonation involves adding carbon dioxide and lime to the melted sugar to form a precipitate of calcium carbonate. The carbonatation precipitate is removed by pressure filtering the sugar liquor through cloth in a pressure leaf filter, leaving a straw-coloured, crystal clear liquid.

Phosphatation involves adding phosphoric acid and lime to the melted sugar and removing the precipitate as a layer from the top of a flotation clarifier. The phosphatated liquor is generally also filtered through sand in a deep bed filter to remove any residual precipitate left after clarification.

This liquid passes through decolourising columns which adsorb the colourant molecules. The clear liquid is then concentrated by boiling in a vacuum pan. It is then seeded with fine sugar crystals which are grown to the required size by adding more liquor. When the crystals are large enough, the crystals and syrup are discharged from the pan.

This mixture of crystals and syrup (called a "massecuite") is processed through a set of centrifugals where the crystals are separated from the syrup. The separated syrup is boiled again and more sugar crystals are extracted from it. This process can be repeated a number of times.

The refined sugar crystals are dried by tumbling them through a stream of air. The dried sugar is graded into the required crystal sizes ready for delivery to customers either packaged or in bulk.

Sugar Australia offers a full range of liquid sugars that are used widely in industry. Liquid sugar is taken from the refining process prior to crystallisation, or can be made by dissolving white sugar in treated water and provides our customers with a convenient source of sugar for producing beverage or food products.

Treacle and Golden Syrup are popular syrups that are refined and marketed by Sugar Australia. Treacle is made from syrups that remain after white sugar is removed from the refining process. It has a distinctively strong flavour and dark colour. Golden Syrup is similar to Treacle, however to produce the familiar golden colour, the syrup passes through a decolourisation process.